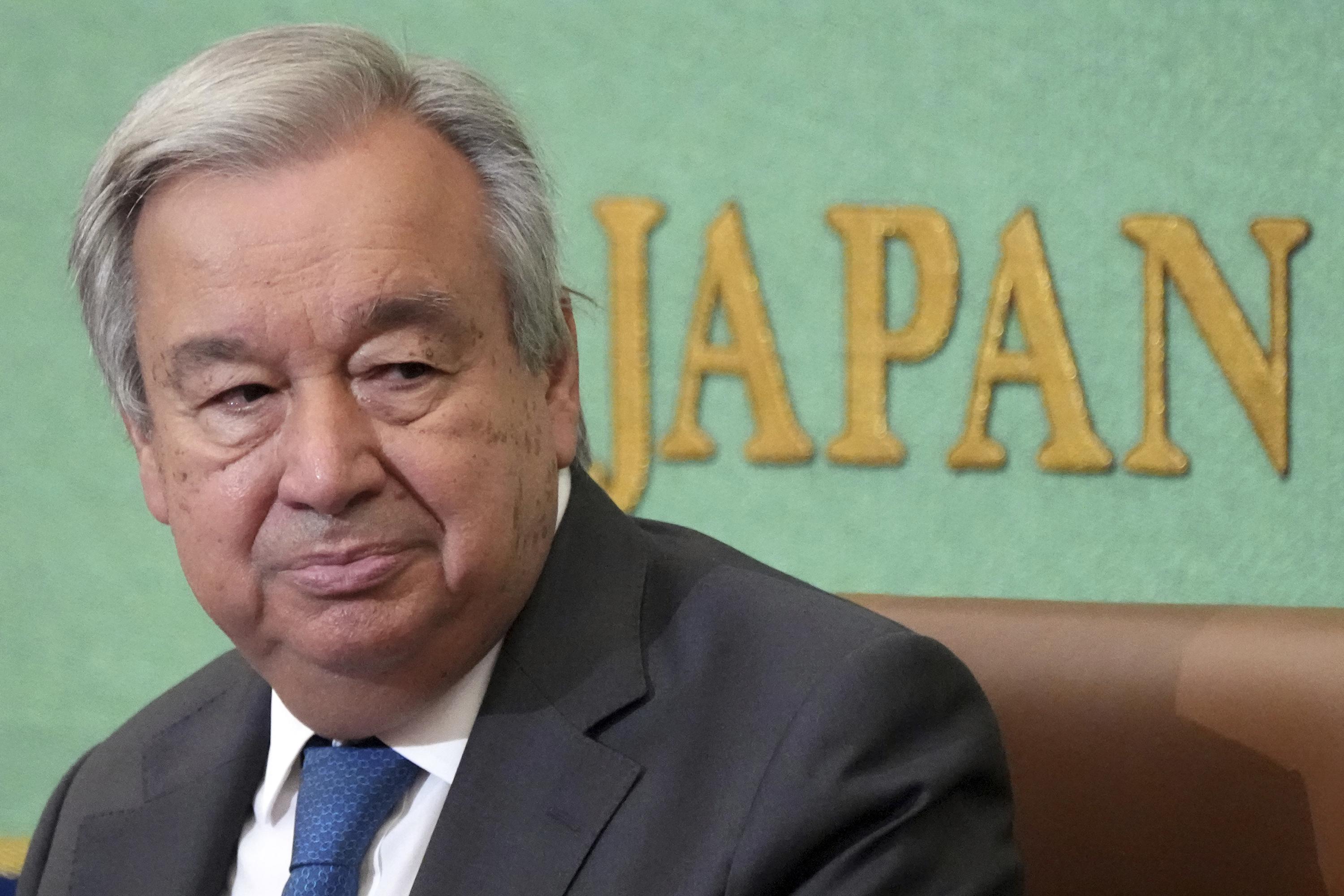 TOKYO (AFP) – United Nations Secretary-General Antonio Guterres on Monday urged nuclear-weapon states to honor their pledge not to use their atomic arsenals, warning of a resurgence of the nuclear arms race amid heightened international tension.

“This is the moment … to demand that nuclear-armed states abide by the principle of no first use, commitment to non-use and no threat to non-nuclear states,” Guterres said at a press conference in Tokyo. Days after his visit to Hiroshima to commemorate the victims On August 6, 1945, the atomic bomb.

I think no one, no one can accept the idea of ​​a new nuclear war. “This would be the destruction of the planet,” Guterres said. “What is clear is that if no one is used for the first time, there will be no nuclear war.”

On Thursday, Moscow bombed the Ukrainian city of Zaporizhia, home to Europe’s largest nuclear plant. When asked about the attack, Guterres said: “Any attack on a nuclear plant is suicidal.”

He said he fully supports the IAEA in its efforts to stabilize the plant and access the facility to exercise its mandate.

Guterres said that after decades of nuclear disarmament efforts, the world is now “moving backwards,” noting that the world already has 13,000 nuclear bombs and huge investments in modernizing atomic arsenals. “So this is the time to say: stop.”

Guterres said billions of dollars in the arms race should be spent on other pressing issues.

“The billions being used in this arms race must be used to combat climate change, fight poverty, and meet the needs of the international community,” he said.

He said he will go to Mongolia and South Korea to discuss ways to tackle North Korea’s nuclear development.

At a time when geopolitical tensions are rising and the nuclear threat is back in focus, Japan’s strong and consistent voice on peace is more important than ever, Guterres said, urging Japan to use its unique position as the only country in the world to have suffered atomic attacks. To serve as a “bridge-builder and peacemaker to promote global cooperation, trust and solidarity.”

Guterres said he counted on Japan’s ability to take the lead in the global fight against climate change, and specifically urged Tokyo to stop funding coal plants.

Japan, which has not indicated when it will ban coal-fired plants entirely, is seen as reluctant to commit to banning coal-fired power as soon as many European countries.

Current efforts in Japan, the world’s third largest economy, are focused on developing ways to burn ammonia in conventional coal-fired plants and phasing out the use of coal. Maybe sometime in the forties. Japan also aims to promote “clean coal” technology in Asia to achieve zero emissions.

Energy experts and pundits say Japan currently has overly ambitious targets for nuclear power to supply 20%-22% of its energy mix by 2030. By then, the country has promised to cut emissions to 46% from 2013 levels.

“There is no such thing as clean coal,” Guterres said. “For real change, I hope that Japanese public and private capital will stop financing coal completely.”

Guterres said he expects Japan, through its multilateral development banks, to “immediately provide investment and support to developing countries to expand renewables and build climate resilience” to find solutions that fit their needs in addressing the climate emergency.

“I call on Japan to make the right decision – for Japan and for the world,” he said.