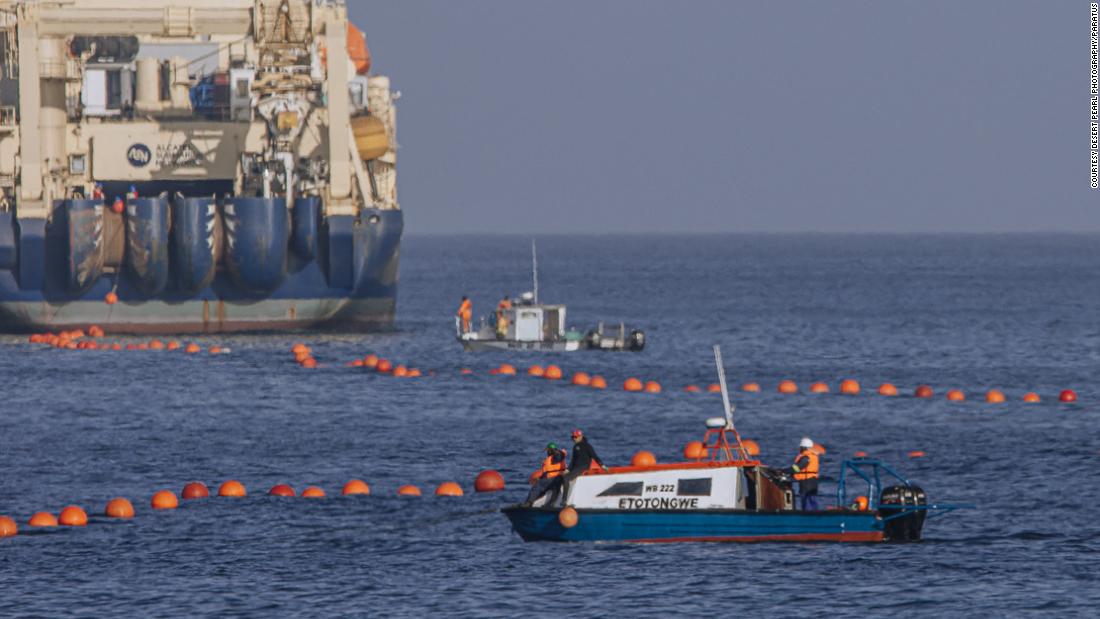 Google Equiano is a subsea internet cable running from Portugal to South Africa, with 20 times the bandwidth of the previous cable serving the west coast of Africa. It has the potential to increase internet speeds five-fold in some countries and reduce data costs, according to research commissioned by Google.

Across the African continent, innovative transport systems, telecoms operations and smart cities are being developed to boost economies and increase trade opportunities. Scroll through the gallery to learn more.

courtesy Desert Pearl Photography/Paratus
Altaeros has entered a partnership with UK company World Mobile to supply internet balloons used to deliver part of its network in Zanzibar. Two solar-powered, helium-filled balloons will float 300 meters (984 feet) above land and have a broadcast range of around 70 kilometers (44 miles) apiece, using 3G and 4G frequencies to deliver their signal. courtesy World Mobile
Just 28 miles (45 kilometers) east of Cairo, Egypt is constructing a New Administrative Capital. The $58 billion project, started in 2015, is designed to be a hub for government and the finance industry. Egypt hopes to entice some of the 20 million residents of its current capital, Cairo, to relocate to the new city, where there is space for 6.5 million people.

The city will feature numerous skyscrapers, including Africa’s soon-to-be tallest building, the Iconic Tower (pictured in the background). In 2020 a $4 billion, 100-kilometer monorail project, connecting Cairo and the new city, was announced.

Bloomberg/Bloomberg/Bloomberg via Getty Images
While Nigeria is one of Africa’s most oil-rich countries, its refineries are only operating at a small fraction of their capacity. It’s not just bad for the economy — fuel shortages mean Nigeria suffers frequent power cuts. But Africa’s richest man, Aliko Dangote, is building an oil refinery he says will solve Nigeria’s fuel problem. Covering 2,635 hectares, the new Dangote Petroleum Refinery will be the largest in Africa, with capacity to process 650,000 barrels a day. Dangote hopes to create a market for Nigerian crude oil worth $11 billion annually. MAN Energy Solutions
Projects like Lekki Deep Sea Port in Lagos aim to reposition African cities as internationally competitive business centers.

The multipurpose port — which will be the deepest in sub-Saharan Africa — is intended to increase Nigeria’s commercial operations across West Africa and its global trading potential. It is designed to handle four million metric tons of dry goods a year. The Chinese Development Bank has loaned $629 million to the project and China Harbour Engineering Company is providing $221 million in equity funding for the port, which is expected to generate revenue of $361 billion and create up to 170,000 new jobs. The port was 96% completed as of July 27, per Lekki Port.

But the dam has been controversial from the get-go. The Blue Nile is one of two sources for the River Nile, providing 85% of the water that flows north through Sudan and Egypt, to the Mediterranean. Colonial-era agreements mean Egypt and Sudan, which rely on the river for their water supply, have maintained control over the river in the past — but Ethiopia’s dam threatens this. Negotiations between Ethiopia, Sudan and Egypt are ongoing, but an agreement is yet to be reached. Ethiopia began generating electricity from the dam on February 20, 2022.

AMANUEL SILESHI/AFP/AFP via Getty Images
Designed to connect Kenya’s main cities, and eventually neighboring nations, the Kenya Standard Gauge Railway is the largest infrastructure project undertaken by Kenya since it gained independence in 1963.

Construction of the first 300-mile (482 kilometer) section between the coastal city of Mombasa and Kenya’s capital, Nairobi, was completed in 2017. Traveling at an average speed of 74 miles (120 kilometers) per hour, the train journey between the two cities now takes just four hours instead of 12. The $3.8 billion project was built by Chinese construction company China Road and Bridge Corporation (CRBC), and 90% funded by China Exim Bank.

Patrick Meinhardt/Bloomberg/Getty Images
Phase two of the Standard Gauge Railway project, connecting Nairobi and Naivasha, a town popular with tourists for its proximity to Hell’s Gate National Park and Mount Longonot National Park, was opened to passengers in 2019. The $1.5 billion project was also built by CRBC and financed by Exim Bank. Extensions to the current line are still under consideration for the coming years, with proposals for lines connecting with Ethiopia, Uganda and South Sudan, as well as further lines within Kenya. Patrick Meinhardt/AFP/Getty Images
Another ambitious railway project, the Lagos-Kano Standard Gauge Railway, in Nigeria, will span 1,678 miles (2,700 kilometers) from the port city of Lagos, to the northern city of Kano, near the border with Niger. Intended to boost the economy, the railway will carry both passengers and freight. Built by China Civil Engineering Construction Company (CCECC) and partially funded by Exim Bank, the project is being completed in multiple stages: the first section between Abuja and Kaduna was completed in 2016, while the second Lagos to Ibadan section began trials in December 2020. Pius Utomi Ekpei/AFP/Getty Images
As Namibia’s largest commercial port, Walvis Bay processes five million tons of cargo every year. A $300 million, five-year project has seen the port more than double its capacity for container units and reduce waiting times for ships. Its new container terminal, built on 40 hectares of reclaimed land, was announced to be fully operational in September 2020. From Namport
Plans for Egypt’s first high-speed rail were announced in January 2021. In May this year, Siemens announced it had finalized a 8.1 billion euro ($8.31 billion) contract with its partners and the Egyptian government for a 2,000-kilometer (1,243-mile) rail system linking 60 cities across the country. (Pictured: a rendering of future fleet carriages.) courtest Siemens Mobility
Egypt’s Suez Canal underwent an $8 billion expansion in 2015 to increase trading potential, and it has paid off, with a 4.7% rise in revenue. However, further expansion might be on the cards: in September 2020, Hala el Said, Minister of Planning and Economic Development, said that $1.1 billion has been allocated to upgrades on the Suez Canal project in 2021. Further expansion is scheduled for completion in 2023. Khaled Desouki/AFP/Getty Images

Work began on the multi-billion-dollar Eko Atlantic project, which is set to transform Lagos, Nigeria’s largest city, in 2009. The new financial hub, occupying 10 square kilometers of reclaimed land, has space for up to 300,000 residents and 150,000 daily commuters. However, there have been concerns that the development of Eko Atlantic is causing coastal erosion, and could make neighboring areas vulnerable to flooding. Moise Gomis/AFP/Getty Images

Still in the early stages of construction, Konza Technological City (also known as Konza Technopolis) is designed to become home to Kenya’s burgeoning tech scene. Just 37 miles outside of Nairobi, the 5,000-acre city is the flagship project of Kenya 2030 Vision, an initiative to push economic growth in the tech and communications sector.

Progress on the project has been slow, but it has raised more than $666 million in funding from China, and Chinese telecoms giants Huawei will develop the data center for the project. Current plans include integrated smart city technology such as roadway sensors that optimize traffic flow .

The Kazungula bridge over the Zambezi river connects Botswana and Zambia. Over 900 meters long, its curved shape steers clear of waters belonging to neighboring Namibia and Zimbabwe. The bridge, which replaces a ferry, was built to speed up truck traffic along a key north-south artery and opened in May 2021. It also has a train line running through its center, which will carry freight and passenger carriages in the future, say its managers. MONIRUL BHUIYAN/AFP/AFP via Getty Images