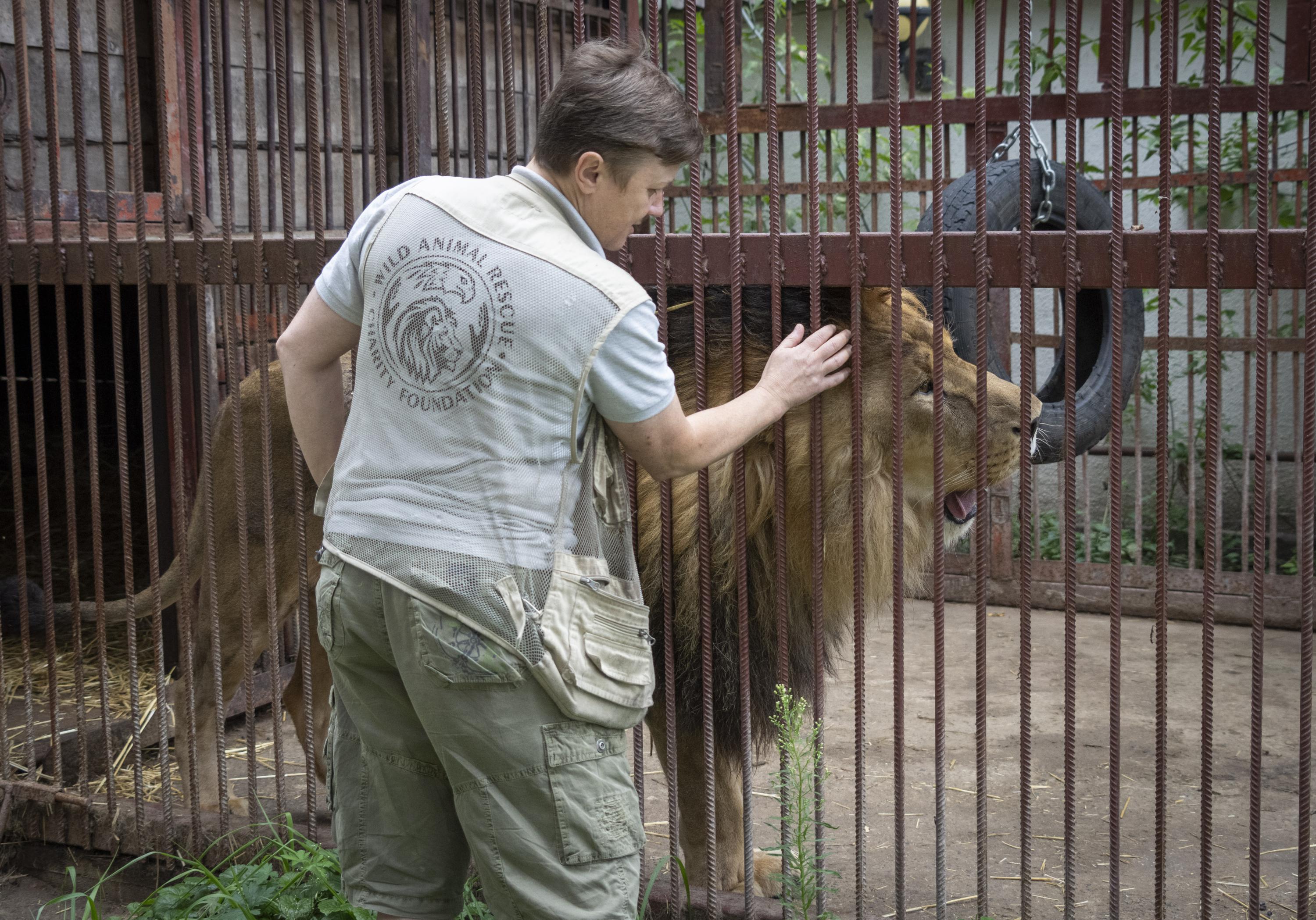 Chubinsky, Ukraine (AP) – Natalia Popova has found a new purpose in life: saving wild animals and pets from the devastation caused by the war in Ukraine..

“It’s my life,” said the 50-year-old, caressing a light-furred lioness like a kitten. Inside the enclosure, the animal rejoices at the attention, lying on its back and extending its paws towards its caretaker.

Popova, in collaboration with animal protection group UA Animals, has rescued more than 300 animals from the war; 200 of them went abroad He found 100 new homes in western Ukraine, which are considered safer. Many of them were wild animals that were kept as pets in private homes before their owners fled Russian bombings and missiles.

Popova’s shelter in the village of Chubinsky, Kyiv region, now houses 133 animals. It is an extensive zoo with 13 lions, a leopard, a leopard, three elk, wolves, foxes, raccoons, and roe deer, as well as domesticated animals such as horses, donkeys, goats, rabbits, dogs, cats, and birds.

Animals waiting to be evacuated to Poland have been rescued from hot spots Like the Kharkiv and Donetsk regions of eastern Ukraine, which see daily shelling and active fighting. Ukrainian soldiers who let Popova know when animals near the front lines need help joked that she had many lives, like a cat.

“Nobody wants to go there. Everyone is afraid. I’m afraid too, but I’m going anyway,” she said.

She often shivered in the car on her way to rescue another wild animal.

“I feel very sorry for them. I can imagine that the animals are under stress because of the war, and no one can help them,” Popova said.

In most cases, you don’t know anything about the animals you rescue, neither their names and ages, nor their owners.

“Animals don’t present themselves when they come to us,” she joked.

During the early months of the war, Popova led alone into hot war zones, but a couple from UA Animals recently offered to transport her and help her.

“Our record is an evacuation in 16 minutes, when we rescued a lion between Kramatorsk and Sloviansk,” Popova said. An economist by education with no formal veterinary experience, she administered anesthesia on the lion because the animal had to be put to sleep before it could be moved.

Popova says she has always been very attached to animals. In kindergarten, she built houses for worms and talked to birds. In 1999, she opened the first private horse club in Ukraine. But she did not save her first lion until four years ago.

An organization against slaughterhouses approached her and asked her to help save a lion with a broken spine. She didn’t know how she could help because her expertise was in horses. But when she saw a picture of big cats, Popova could not resist.

She built a fence and took the lion the next morning, and paid the owner. Later, Popova created a page on social media called “Help the lioness”, and people began to write asking for help in saving other wild animals.

Yana, the first lioness to be rescued, became a family member because she could not find a new home due to a disability. Popova took care of her until she died two weeks ago.

The shelter is just a temporary stop for the animals. Popova rehabilitates them and then searches for new homes for them. She feels a special bond with each big cat, but says she doesn’t mind letting them go.

“I love them, and I understand that I don’t have the resources to give them the comfortable life they deserve,” Popova says.

At first, she funded the shelter with her own money from the horse business. But since Russia invaded Ukraine on February 24, the horse trade has not been profitable. With more than $14,000 a month needed to keep the animals healthy and fed, she resorted to borrowing, and saw her debts grow to $200,000.

She gets some money from UA Animals and from donations, but worrying about how to keep everything together kept her up at night.

But I will still borrow money, go to hot spots and save animals. “I can’t say no to them,” she said.

Popova sends all her animals to the Pozna Zoo in Poland, which helps her evacuate them and find new homes for them. Some of the animals have already been transported to Spain, France and South Africa. Her next project is to send 12 lions to Poland this week.

With no end to the fighting in sightPopova knows she will still be wanted.

“My mission in this war is to save the wild animals,” she says.

Follow all AP articles on the war in Ukraine at https://apnews.com/hub/russia-ukraine.