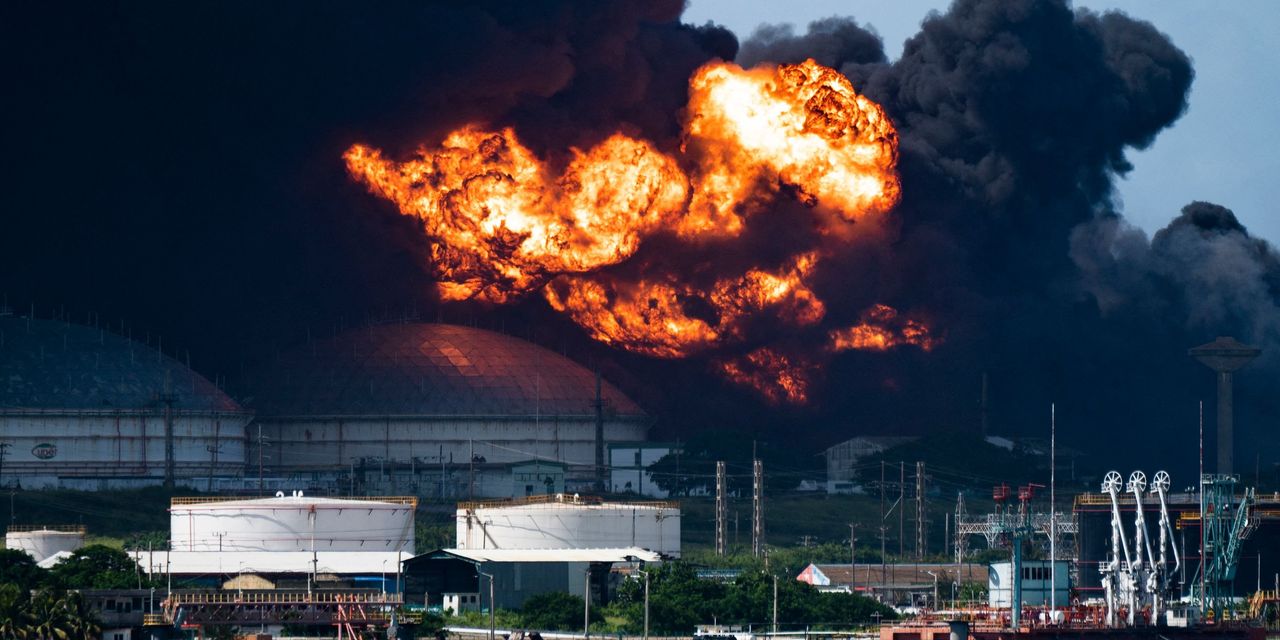 Cuban authorities said Saturday that a major fire has spread out of control at a large oil storage facility in the Cuban port of Matanzas, with explosions and fires leaving at least 121 injured and 17 firefighters missing.

An enormous plume of black smoke, visible for miles, rose hundreds of feet into the air from the massive fire that enveloped two of eight large fuel tanks at the Matanzas Supertanker Base, a storage station located near one of Cuba’s most important power plants. miles east of the capital, Havana.

Authorities said the fire was started by a lightning bolt in a storm Friday night. More than 1,900 residents and staff were evacuated, and at least eight people were seriously injured. The Communist Party newspaper, Granma, said authorities had no news of the firefighters’ disappearance late Saturday.

The authorities said that the fire caused several large explosions. Residents said on social media that the mist and smell of burning fuel had reached the island’s capital.

“We are working hard and in very difficult circumstances,” Cuban President Miguel Diaz-Canel wrote on Twitter. “Extinguishing the fire may take some time.”

The terminal is the only one on the island equipped to handle large oil tankers. It’s also where the crude oil produced in Cuba is stored, blended and shipped to other power stations that supply the electric grid, said Jorge Peñón, an expert on Cuba and energy at the University of Texas at Austin.

“It’s the hub of Cuba’s infrastructure wheel,” he said. Mr. Binion added that Cuba may have to halt its oil production, estimated at about 40,000 barrels per day, if the damage to the plant is significant.

The US State Department said it had offered technical assistance, to which Mr. Diaz-Canel was grateful. Cuban authorities said Mexico and Venezuela, which have large state-run oil industries, were among the countries that sent aid on Saturday.

The communist island is already suffering from an energy crisis, including blackouts due to fuel shortages and poor maintenance at its old power plants. The power outages extended as long as 12 hours in some areas within the island, causing food spoilage in the scorching summer heat and as residents acclimated to widespread shortages of food, medicine and basic goods. In large cities such as Havana, programmed power cuts for an hour have recently been carried out.

An energy crisis and a deep economic downturn have fueled social unrest after a year of mass demonstrations that rocked the country.

“It was one punch after another,” said Miguel Bustamante, a Cuban expert at the University of Miami.

On Saturday, local authorities said that the Antonio Guitras power plant had enough fuel to last only 48 hours since pumping from the Matanzas plant stopped.

“If this plant goes out, it is hard to imagine what will happen to the entire electricity grid on the island,” added Mr. Bustamante.

This is the second major disaster to hit Cuba in recent months. In early May, 46 people were killed and dozens injured when a gas explosion hit the Saratoga Hotel in Havana, just days before the iconic state-run hotel was due to reopen after its remodeling.

Dire economic conditions, as well as ongoing political repression, prompted tens of thousands of Cubans to immigrate to the United States last year.

Despite last year’s crackdown, there have been more than 40 spontaneous demonstrations since mid-June to demand the restoration of electricity service and civil rights, estimates Inventario, an online publication that monitors data and social media in Cuba.

The internet was cut off during the protests to prevent residents from instantly sharing videos and photos on social media with the aim of boosting participation. Security forces arrested more than 26 people during the recent protests, according to Justicia 11J, a Cuban civil society organization that tracks detentions in the country.