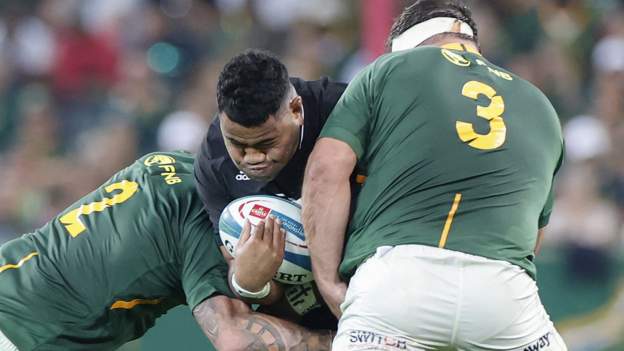 New Zealand fell to a fifth defeat in their last six Tests as they lost 26-10 to South Africa in the opening match of the Rugby Championships in Nelspruit.

Wing Kurt-Lee Arendse, who was later fired, was shown on the first try.

Handry Bullard kicked the Springboks 19-3 up front but Shannon Friesel pulled one back with a late effort.

While the All Blacks were pressing another goal, substitute Willie le Roux scored in the penultimate game of the match and Pollard began the final conversion.

More disappointment for visitors after the defeat of the first home test series by Ireland last month.

Arendse’s first international attempt was just a bonus as the world champions dominated the set-piece and collapsed from the start of the match, despite losing half-football Faf de Klerk to a header in the first minute.

Pollard’s 16 points further damaged the All Blacks as the hosts recorded their biggest win over their opponents in the Southern Hemisphere since 1928.

The only negative for the Boks was Arendse sent off for a dangerous interference in the air at 75 minutes.

But Frizzell’s late response did not dampen the party atmosphere at Mbombela Stadium as Lou Roux hit a loose ball to move away and score a second South African attempt.

New Zealand entered the match as underdogs, but their third consecutive defeat adds to the pressure on coach Ian Foster.

“Congratulations to South Africa, they were more capable than us,” Foster said. “They played their game well.

“Under pressure they went to the kicking match and that put us under a lot of pressure.

“For us, I actually thought it was a step up from the last streak. The squad worked really well, the blow defense was good and our overall defense was very strong.

“Maybe we missed a little bit of timing in terms of our attack. We’ll have to go and look at that.”

New Zealand conceded 11 penalties to Bucks’ seven, and Foster added: “I felt we didn’t get the green net in the first 20 minutes and that put us a little bit behind.

“The third quarter was crucial for us in terms of getting back into the game, but all the Springboks did was hold it hard and get a few penalty kicks. That’s their game, and it’s a game of pressure.

“I saw as the match started that chances were starting to appear, there were just two mistakes in the handling. I thought we made some strides [forward]But we have to prove it next week.”

All Blacks captain Sam Kane said, “The Springboks threw a hell of a lot at us, we worked really well to accommodate it, but it took a lot of us. They kept putting pressure, especially on the crash, which disrupted a lot of our flow.

“We are bitterly disappointed, it really hurts. We have to get better if we break down and compete [in the air]. I couldn’t ask for more from the team in terms of faith and effort. It’s just small margins at that level.”