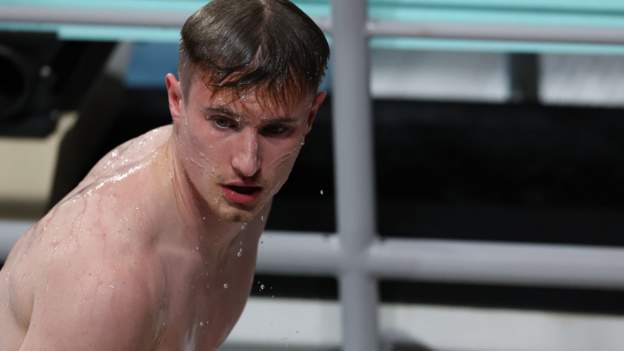 England diver Jack Luger blamed nerves for his uneven performance in the pre-3m platform jump as he reached the final.

Luger, the event’s defending champion, scored a zero in the first round after performing a wrong dive.

He was scheduled to do a two-and-a-half forward somersault with two pike twists, but he missed the flips.

He was eventually able to qualify for 11th place, with only the top 12 out of 15 players advancing.

“I had a little tremor in my knee on the board, I was a little nervous and doubting myself a little too much,” Luger told BBC Sport.

“When you do a twist dive you have to release your legs into the twist, and I’m past that point because I’m able to do that and I just did a different dive.

“As soon as you fail to dive in for the first time, emotion comes into play a lot and you start wanting it a lot.

“I think when emotion is attached to it, it makes diving very up and down. So I’m going to reset myself, fall asleep and sleep and come back later and do my best.”

The 27-year-old is chasing his third gold medal at the Commonwealth Games, a treble he completed at the last edition of the Games in 2018.

He won the 1 million starting title and the 3 million jump title simultaneously on Thursday and Friday, respectively.

The final of the three-meter vault will take place at 18:05 GMT tonight. Luger will be joined by England teammates Dan Goodfellow and Jordan Holden in the final, as well as Scotland’s Ross Petty and James Heatley.

“I think I’m the favorite, and that’s very clear after my performances at the previous Commonwealth Games and at Realms as well,” Luger said.

“I think when you have this expectation of you from yourself, from a crowd as well, it can be very difficult.

“Staying at the top is really difficult and obviously I want the third gold.

“Maybe I’m putting too much pressure on myself and just need to enjoy it again and relax.”